It started Good Friday and will end April 8th with the Orthodox Christians Easter. Irina and I went into the center of Minsk where a vast majority of Churches of all religions reside, we prayed at her Orthodox Christian Church “Holy Spirit Cathedral” It is the central cathedral of the Belarusian Orthodox Church, the cathedral dates back to 1633-1642, when the Bernardine monastery was built, at a time when the city was in centre of the Polish-Lithuanian Commonwealth.  The building was damaged by fire in 1741 and required the reconstruction of the entire monastery. I will give you more history on this church as we attend Easter Festivities on April 8th.

As we celebrated my Holy Saturday we discussed that Holy Saturday is when Jesus went to hell to preach to the imprisoned souls before his Resurrection into Heaven on Easter.

We made our way about one half a mile to the Catholic Church “The Cathedral of St. Virgin Mary (Архикафедральный собор Святого Имени Пресвятой Девы Марии) it is a Roman Catholic baroque cathedral, the seat of the Roman Catholic Archdiocese of Minsk-Mohilev. It was built under the Polish rule in 1710 as a church for the Jesuit house.  This church has had an illustrious career, it was destroyed by fire, rebuild, the church was liquidated, it was closed down by the Soviets, during World War II Germany let it function as a church, then it was destroyed by the Soviets again, used as a sports society, then the church was finally given back to the Catholics in 1993 and the first mass again was said in 1997 since then all the Frescoe’s have been restored. 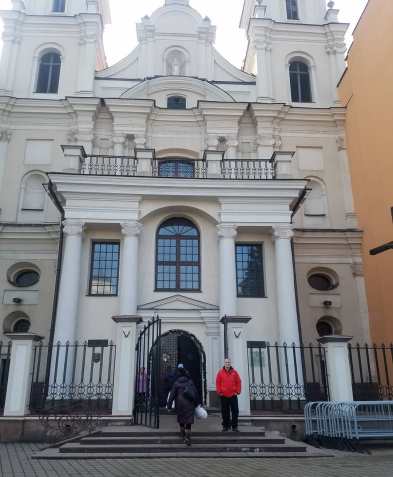